The excitement that we held in our minds and hearts was, surprisingly, soon to wane. We had heard the nights got a bit chilly in Buena Vista, but this, this was a different level. This was freezing. We were caught completely off-guard! We had all gone to bed with a couple of layers on; I even wore my beanie. It wasn’t even close to being enough. So, as you could guess, it was a restless night. Let’s just say it wasn’t the most optimal preparation for what panned out to be one of the most physically demanding morning of my entire life…

As planned we were all up around 7am – quite an impressive feat in itself for the five of us lads, each in our early twenties. We had a little help, however… the Leiva family coffee! Head coach of the academy and co-founder, Mynor Leiva, and his family have their own coffee plantation in the northern mountains of Guatemala. I can accept I may be a little biased here, but, this coffee is big time! One cup of this stuff and you’re right as reign. It seemed to be a quickly established morning tradition to meet on the terrace, overlooking the mountains of Guatemala, down onto its capital city, and share jokes over a hot mug of Leiva coffee. Something I’m sure I’ll miss.

After breakfast, we all met in the arena to meet the rest of the Rhino Academy players. Although we’ll soon find out these boys have the grandest hearts of all on the soccer field and in life, the introductions were short lived due to their shyness and timidness  when speaking to the gringo strangers! We moved on though, and were soon thrusted into a situation that timidness had no place for. It was time for the Rhino-Run.

As Señor Brock proceeded to elaborate on the tasks, our [the gringo’s] mouths dropped and hearts sunk. We were to be split up into small groups of 4 or 5. One gringo (Myself, Cam, Coach Mau, Q, Hayden, and Waldy), one of the academy graduates, and two of the junior varsity players. It was a race. Not just any race though. We had tasks to complete along the way, each with their own specific idea to better the community around us. We could complete these tasks in any order. Whoever was back first with every task completed won. One task was, due to the uncontrolled issue of litter in Buena Vista, was to make a t-shirt out of a trash-bag, have one of the boys wear it, and then stick as many pieces of litter to that bag as possible; one was to visit the disabled father of Allan Marroquin, make him laugh and give him a gift; another was to reach the top of El Tablón and pick up a flag from Señor Mynor; one was to make it to the school field in Buena Vista and practice our juggling skills (a total of 50 between the four of us had to be met, without it dropping, before moving on); the next, to find a family with at least three children in the household, read them the story of Jesus’ death, and then give them the gift of a Bible; [foolishly] our final mission was to head to the top of the village, collect firewood, and deliver it to Señora Carmen, a dear friend of the ministry who, unfortunately and unexpectedly, lost her husband earlier that month. Doesn’t sound like much, right? Well, try to do all that as quickly as possible, over the distance of around 7 miles, most of which was up hill, in altitude. For sure, tougher than any preseason run I’ve ever done!

I can honestly say my teammates [metaphorically] carried me through that. Allan, Cheeks, and Jason, set the pace. I just tried to keep up and not let them down. You could tell Allan desperately wanted to win from the start; he set off like Usain Bolt out of the blocks, and didn’t slow down once. Having grown up in Buena Vista, Allan knew it like the back of his hand. He set off on, let’s just call it “the scenic route”… down mountain sides that pro-mountain bikers wouldn’t attempt, along cliff edges with thirty-foot drops, over fences, under fences, all of which I’m sure would have been illegal in the US!

Though he had the best brains in Buena Vista chaperoning us around town, we only ended up coming in second place, just behind Q and his group! I was content, it may’ve taken the rest of my group a little longer to get over the ‘loss’ than me – I was just happy to survive! Although we had the best workout ever, we also got some great community service work done too; Cheeks told Señor Marroquin a great joke to make him laugh; little Jason collected an enormous amount of trash; Allan shared the story a Jesus’ death with a farming family on the outskirts of the village, and presented them with a new Bible; and we also managed to deliver five bundles of fire wood to Señora Carmen’s house. A small lesson I learned that morning, no matter how hard you individually work to provide for someone, all you need in return is the knowledge that you may have made a  difference in someone’s life, no matter how small or large. The other; nothing will ever be as hard as the Rhino-Run to El Tablón!

Post run, we had lunch, followed by an hour or two of down time. Here we all just seemed to be playing a game of top-trumps with how bad each of us had it during the morning adventure; although my tale of Allan making our group embark on a minute of Indian-runs on what appeared to be a forty-or-so- percentage gradient was good, poor Hayden looked like he had it worse. He had no particular story, but his face as we all past him was one of sheer pain. Shout out to Hayd’ though, we all made it!

Another coffee to get our feet from underneath us, and we were on our way for the afternoon. It turned out to be an eye-opening afternoon. We were all in pain, but that pain soon subsided when we began an afternoon of home visits to some of the academy boys’ homes. First Allan, where we met his family; His sister, his sister Rina, her children, Milagros, Dilan, Emerson, and Lurdin; Allan’s Dad, who we had met in a fleeting visit earlier on that day; but, most importantly of all, the angel that is Allan’s Mother. A self-confessed Mummy’s boy, Allan had the most heart-warming of smiles on his face and tears in his eyes whilst introducing his Mother. A translation of Allan’s words I noted down read, “She is the strongest of us all.” I was choked up. All I could think about was my Mum. Another self-confessed Mummy’s-boy, I had this weird feeling, I knew how Allan felt. All he wants is to repay her for everything she’s done for him, through thick and thin. It was here, for the first time, I realized, we’re all not so different. We made be living in different worlds, but, we, as people, as inherently the same.

Always smiling; the children of the Marroquin family.

Mornings were good when Leiva Coffee was involved. 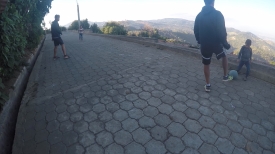 Street soccer with a view. 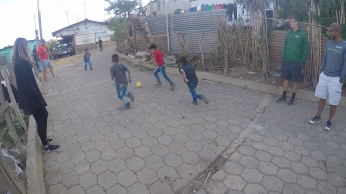 For the love of the game. 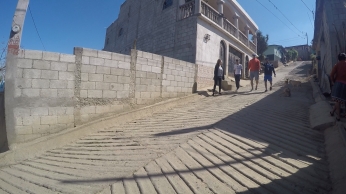 An average gradient in BV. 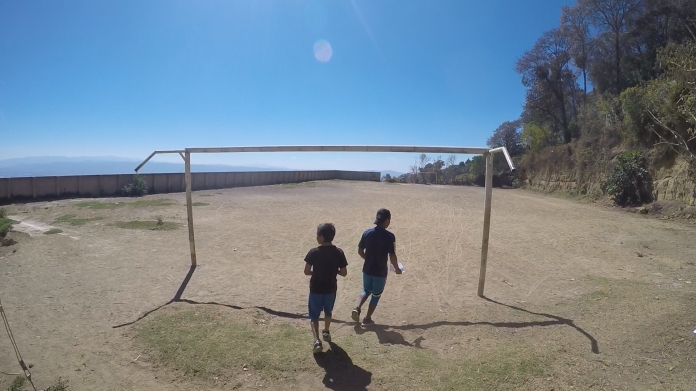 The early stages of the infamous Rhino Run.

Following Allan’s house, we then made our way to Quique’s, Cheeks’, and Denilson’s homes. Although Quique and Denilson now live in the academy with the Johnson’s, this was where they had spent all their lives. Their stories were staggering; both in an impressive and incomprehensible way. Quique’s story was inspiring. He lived the Buena Vista life; abuse, malnutrition, poverty. Quique, though, had something different, he had a dream, a vision. As an extremely dedicated and disciplined individual, Quique progressed well in school, so well that he envisioned himself going to University. Quique began University at the beginning of 2017 in the city of Antigua. He is the first person ever from the Buena Vista community to attend a university! Quique studies Business Administration, and hopes, when he graduates, to come back and help run the business operations of the academy and help the Buena Vista community continue to develop and improve. To be the first, that’s quite something! It was outstanding to see how determined, resilient, and willing to different Quique was, in order to challenge the status quo and make his dream a reality. These Rhinos are something special!

Concluding our visits we headed to see Denilson’s home and his Mother. Just around a couple of narrow pathways, a few more stray dogs, and there we found it, Denilson’s home, greeted by his lovely Mother. Brock and Leiva ensured us Denilson’s story was one of the worst of the worst. We began with the usual preliminary questions; what are your thoughts on Denilson’s involvement with the Academy? What do you do for work? How many children do you have? With apprehension in our words Brock encouraged us to be more courageous, to truly find out their personal story. This is where things began to open up. Denilson started, Brock translated:

“My Dad, like a lot of the other Rhino boys’, is an alcoholic. He would often go on binges   for two, three, four weeks at a time. Sometimes he’s clean, but all of a sudden he’ll begin drinking again. It was then he was scariest. The biggest problem I had would be when he returns home from drinking. I’d be lying in bed, hearing him shout at my Mom, and then I’d hear him begin beating her. Sometimes I got up to help my Mom. Sometimes I just lay there and listen to it. My fear was that if I got involved, I would get beaten too.”

My heart broke there and then. This was something I couldn’t comprehend. I still can’t. This is a daily occurrence, in multiple households in Buena Vista. Their only hope, Los Rhinos.

On our journey home, we stopped by the local five-a-side court, and watched a few games of some of the older guys from the community. Some brothers of the Rhino’s, some former Rhinos themselves. After a short period, we all plucked up a little spirit to give the locals a game. This wasn’t a regular five-o’s game. These boys had tactics, they knew what worked, in particularly a counter-attack fashioned by distinct throw/lob from the keeper straight to the on rushing forward. We’d be caught off-guard, with no-legs left after the morning run, and some questionable goalkeeping from big Cam himself, we ended up losing 3-2. I didn’t think the result was too bad, 2 away goals in the first leg… pity we didn’t play them again!

Difficult conditions to perform for the gringos; Away from home, the altitude, new group of players, dodgy keeper heavy legs. No excuses though…

Entonces… day two in the books. A tiring day. An eye-opening day. An inspiring one too. One that we’ll never forget.

Sonder's Secret is an idea created by two friends, Sable Lee and Jack Burns, in the Spring of twenty-sixteen. Our blog has the intention of enabling us to express meaningful stories with the notion of benefiting those who we are fortunate enough to have read them. We hope our accounts and representations are simultaneously thought-provoking, enlightening, inspiring, & entertaining. We ourselves are in a position to learn, and we embrace our blog as another platform from which to discover and educate ourselves in an ever-changing & challenging world. View all posts by SondersSecret 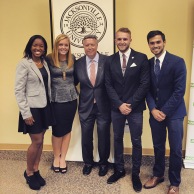 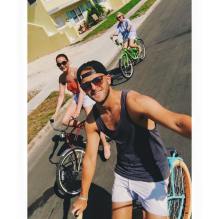